EMBO HOUSE: A CASTLE OF THE CLAN GORDON

From 16th Century Manor to Grade A Listed Georgian Mansion

Embo House appears today as an elegant, Grade A listed Georgian mansion overlooking the sea. However, it actually dates from the sixteenth century, and its appearance has changed through time. The original, six-room manor house (which now forms part of the west wing) was home to the Gordons of Embo, scions of the Gordons, Earls of Sutherland for two hundred years, and therefore Embo House is an ancestral Castle of the Clan Gordon. The house still holds a marriage stone, once built into the house, dated 1677 and bearing the arms of Sir Robert Gordon of Embo and his new wife, Dame Jean Leslie. A copy of the stone is on public display at Dornoch’s Historylinks Museum, but the original is still in the house. For more information about the Gordon Clan, do look at www.houseofgordon.org

It is believed the house suffered a very serious fire towards the end of the eighteenth century and the last of the old family to live there was Sir John Gordon, 5th baronet, who died at Embo on January 24th, 1779, with mountainous debts.

The principal creditor was Robert Hume Gordon, who went on to acquire the estate and rebuild / extend the house around 1790. His political ambitions dictated it should be substantial and handsome; it was part of his strategy to win a parliamentary seat against an opponent backed by the Duchess of Sutherland.

Gordon wanted a country seat which would rival the grandeur of the Duchess’ Dunrobin Castle. However, having completed Embo – and no doubt entertained the local electorate in grand style – he lost the election!

Strongly influenced by the fashionable New Town houses in Edinburgh, Gordon’s newly completed house might not have swayed the voters but it clearly made quite an  impression on the Rev. Donald Sage who, in 1801, described Embo House as “the most elegant mansion I have ever witnessed”. 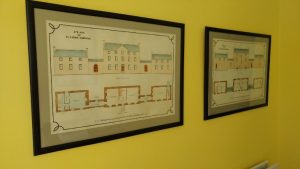 It appears though, that from then on, none of the members of the Gordon family ever lived in the house and in 1900 it was first leased and later purchased by Mr John Mackintosh, along with Embo Farm and the villages of Embo and East Hilton.

The Mackintosh family still farm all the land around the house. More recently, Embo House was owned by the Lafferty family, who substantially updated it. They now live nearby in Dornoch.